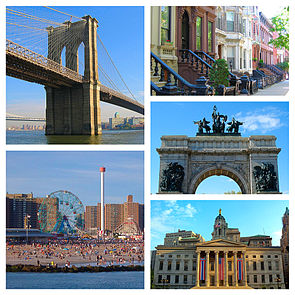 Brooklyn (/ˈbrʊklɨn/) is the most populous of New York City‘s five boroughs, with a Census-estimated 2,621,793 people in 2014. It is geographically adjacent to the borough of Queens at the western end of Long Island. Since 1896, Brooklyn has had the same boundaries as Kings County, the most populous county in the State of New York and the second-most densely populated county in the United States, after New York County (Manhattan). With a land area of 71 square miles (180 km2) and water area of 26 square miles (67 km2), Kings County is the fourth-smallest county in New York State by land area and third-smallest by total area, though it is the second-largest among New York City’s five boroughs. Today, if it were an independent city, Brooklyn would rank as the fourth most populous city in the U.S., behind only the other boroughs of New York City combined, Los Angeles, and Chicago.

Brooklyn was an independent incorporated city (and previously an authorized village and town within the provisions of the New York State Constitution), until January 1, 1898, when, after a long political campaign and public relations battle during the 1890s, according to the new Municipal Charter of “Greater New York”, Brooklyn was consolidated with the other cities, boroughs and counties to form the modern “City of New York” surrounding the Upper New York Bay with five constituent boroughs. It continues, however, to maintain a distinct culture, as befitting the former second or third largest city in America during the later 19th century. Many Brooklyn neighborhoods are ethnic enclaves where particular ethnic and nationality groups and cultures predominate. Brooklyn’s official motto is Eendraght Maeckt Maght, which translates from early modern Dutch to “In unity, there is strength“. The motto is displayed on the Borough seal and flag, which also feature a young robed woman bearing a bundle of bound rods known as a “fasces“, a traditional emblem of Republicanism. Brooklyn’s official colors are blue and gold.