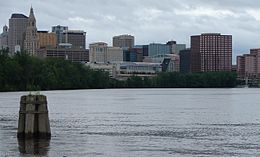 Hartford is the capital of Connecticut and the historic seat of Hartford County until Connecticut disbanded county government in 1960. As of the 2010 Census, Hartford’s population was 124,775, making it Connecticut’s fourth-largest city after the coastal cities of Bridgeport, New Haven, and Stamford.

Nicknamed the “Insurance Capital of the World”, Hartford houses many insurance company headquarters, and insurance remains the region’s major industry. Founded in 1637, Hartford is among the oldest cities in the United States. Hartford is home to the nation’s oldest public art museum, the Wadsworth Atheneum; the oldest public park, Bushnell Park; the oldest continuously published newspaper, The Hartford Courant; the second-oldest secondary school, Hartford Public;Trinity College, an elite, private liberal arts college, and the Mark Twain House where the author wrote his most famous works and raised his family, among other historically significant attractions. In 1868, resident Mark Twain wrote, “Of all the beautiful towns it has been my fortune to see this is the chief.”

Following the American Civil War, Hartford was the richest city in the United States for several decades. Today, Hartford is one of the poorest cities in the nation with 3 out of every 10 families living below the poverty line. In sharp contrast, the Hartford metropolitan area is ranked 32nd of 318 metropolitan areas in total economic production and 7th out of 280 metropolitan statistical areas in per capita income. Highlighting the socio-economic disparity between Hartford and its suburbs, 83% of Hartford’s jobs are filled by commuters from neighboring towns who earn over $80,000, while 75% of Hartford residents who commute to work in other towns earn just $40,000.