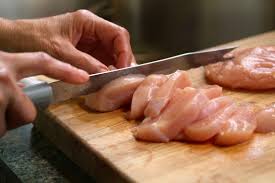 Salmonellosis, the infection caused by the bacteria Salmonella, is one of the most frequently reported foodborne illnesses in the United States.

Salmonella is characterized as a group of rod-shaped bacteria that can cause diarrheal illness in humans.

Prono: sal•mo•nel•la. The first “L” is pronounced, unlike the silent “L” in salmon, the fish.

General Information: (Source: CDC)
Approximately 42,000 cases of salmonellosis are reported in the United States every year. The estimated number of actual cases, though, is much higher, at about 1.2 million, due to many cases not being diagnosed.

Salmonella live in the intestinal tracts of animals, birds, and people.

Foods contaminated with Salmonella are often of animal origin, such as beef, poultry, milk or eggs, but any food may become contaminated.

It rarely affects the taste, smell, or appearance of food.

Salmonella includes over 2,300 serotypes (species) of bacteria. Salmonella serotypes typhimurium and enteritidis are the most common in the United States and account for half of all human infections.

S. typhimurium is most commonly found in food of an animal origin.

S. enteritidis is mainly associated with poultry and eggs.

Symptoms and Treatment:
Typical symptoms include diarrhea, abdominal pain, nausea, vomiting, and fever. Most people experience symptoms within 8 to 72 hours after contaminated food is ingested.

Salmonella infections can be life-threatening especially for young children, pregnant women and their fetuses, the elderly, and people with weakened immune systems. The Salmonella infection can spread from the intestines to the blood stream and cause death if not treated early.

A small number of persons infected with Salmonella may develop Reiter’s syndrome which causes painful urination, joint pain, and eye irritation. This condition can last for months or years and can lead to chronic arthritis.

People infected with Salmonella should not prepare food for others. Proper storage and handling of food helps prevent the growth of Salmonella and thorough cooking destroys the bacteria. Raw or undercooked meat or eggs and raw or unpasteurized dairy products should not be consumed. Produce should be washed thoroughly.

Wash hands with soap after changing diapers or using the restroom.

Wash hands after handling pets. Reptiles are especially likely to carry Salmonella, since it can contaminate their skin. Salmonella is also often found in the intestines of chicks and young birds.

Timeline of recent selected cases in the United States:

October 7, 2013 – The U.S. Department of Agriculture issues an alert about illnesses caused by strains of Salmonella Heidelberg that are associated with raw chicken products produced by Foster Farms in California.

A total of 316 persons in 37 states have been infected.

April 25, 2013 – The CDC announces that public health and agriculture officials across several states are investigating an outbreak of human Salmonella Typhimurium infections linked to contact with live poultry.

May 10, 2013 – The CDC announces that interviews conducted during the investigation reveal that 94% of ill persons reported contact with live poultry before becoming ill.

A total of 42 persons in 20 states have been infected.

October 4, 2012 – Sunland, Inc. expands the recall to include all products manufactured in its Peanut Butter Plant after March 1, 2010.

October 12, 2012 – Sunland, Inc. expands the recall further to include raw and roasted shelled and in-shell peanuts processed in its Peanut Processing Plant.

November 26, 2012 – The FDA suspends Sunland Inc.’s food facility registration, which means Sunland Inc. is prohibited from distributing food. The FDA will reinstate the registration when it is determined that the company is able to produce safe products.

A total of 425 persons infected with the outbreak strains of Salmonella Bareilly or Salmonella Nchanga have been reported from 28 states and the District of Columbia.

According to the CDC, frozen raw yellowfin tuna product, known as Nakaochi Scrape, from Moon Marine USA Corporation is the likely source of this outbreak.

April 13, 2012 – Moon Marine USA Corporation voluntarily recalls 58,828 lbs of a frozen raw yellowfin tuna product, labeled as Nakaochi Scrape. Nakaochi Scrape is tuna backmeat, which is specifically scraped off from the bones, and looks like a ground product.

Ground turkey – February 2011
CDC confirms an outbreak of Salmonella Heidelberg that links to 136 cases from 34 states.

May 2010 – The CDC notices an uptick in salmonella infections being reported, traces the source and determines it is most likely eggs from Iowa’s Wright County Egg.

August, 2010 – Wright County Egg initiates a nationwide recall of shell eggs. Over the course of the month, the recall expands to include millions of eggs from more than a dozen companies that use Wright County Egg as a supplier.

August 26, 2010 – Federal investigators find salmonella bacteria in chicken feed and in barn and walkway areas at Iowa farms at the center of the nationwide outbreak.

November 2010 – Approximately 1,939 illnesses have been reported that are likely associated with this outbreak.

One of the largest food recalls in U.S. history.

January 3 and 4, 2009 – Preliminary analysis by the CDC of a multi-state study indicates peanut butter as the likely source of the bacteria causing Salmonella infections that began in early September 2008.

January 13, 2009 – PCA announces a voluntary nationwide recall of all peanut butter and peanut paste produced in the Blakely facility since July 1, 2008.

February 9, 2009 – The FBI raids PCA headquarters in Lynchburg, Virginia, and the Blakely plant.

February 11, 2009 – After being subpoenaed, PCA President Stewart Parnell appears before a House Energy and Commerce subcommittee about the outbreak but refuses to answer questions, invoking his Fifth Amendment right not to incriminate himself. E-mails between Parnell and plant manager Sammy Lightsey reveal that Parnell gave instructions to release products that had initially tested positive for Salmonella after getting a second, negative test result.

February 12, 2009 – The Texas Department of State Health Services orders a recall of all products ever made at the PCA plant in Plainview after finding rodent excrement, carcasses, and bird feathers in a crawlspace above the factory’s production area.

February 13, 2009 – The one plant operated by PCA not linked to Salmonella, Tidewater Blanching in Virginia, closes. PCA files for bankruptcy.

September 19, 2014 – A jury in Georgia convicts Stewart Parnell of conspiracy, fraud and other federal charges linked to intentionally shipping out salmonella-laced peanut products. The guilty verdict marks the first federal felony conviction for a company executive in a food safety case.

ConAgra peanut butter, 2006-2007
February, 2007 – ConAgra recalls Peter Pan and Great Value peanut butter nationwide after public health officials link a spike in salmonella infections to the sandwich spreads. According to the CDC, the first patients began falling ill in August of 2006 and the number of cases increased through the winter. FDA Inspectors detect salmonella at a ConAgra plant in Sylvester, Ga, where Peter Pan and Great Value peanut butter are produced. It is the first time peanut butter causes the widespread outbreak of a foodborne illness in the U.S., according to the CDC.

2011 – A federal criminal investigation of the salmonella outbreak is launched, as the U.S. Attorney’s Office for Georgia and the DOJ Consumer Protection Branch begins submitting requests for documents from ConAgra related to the Sylvester peanut butter plant.

May 20, 2015 – ConAgra is charged with one criminal count of introducing adulterated food into interstate commerce. The company reaches a plea agreement to pay an $8 million criminal fine and forfeit $3.2 million in assets. It is the highest fine ever in a food safety case, according to the DOJ. Investigators conclude that more than 700 people fell ill after eating the peanut butter and thousands of other cases may have gone unreported.