Blog
Doctors @ Your Home / Health / You Know what Ticks Us Off? Lyme Disease
Jun 21

You Know what Ticks Us Off? Lyme Disease

The US Centers for Disease Control (CDC) recommends that children who spend time in tick-inhabited parks, woods and forests be checked from head to toe for ticks embedded in their skin. Prompt removal of such insects prevents Lyme Disease. If you live in a particularly heavily infested area, check children after they spend time in your yard. In the US, in recent years, about 30,000 cases of Lyme disease were reported annually with many more cases going unreported.

1. 2017 may produce a bumper crop of ticks. A relatively warm winter allowed more ticks to survive from the previous season. Changing rainfall patterns permit ticks (and other insects) to thrive, enlarge their geographic habitat, and extend their biting season. Mice populations may also be increasing and for similar reasons. Global warming may be a factor.

2. Ticks are not the cause Lyme disease. However, Lyme disease would not exist without ticks. The cause is a bacteria which is found on animals, mostly deer and mice. Ticks transmit the bacteria from animals to humans. Only some animals are able to harbor the bacteria and only some ticks can transmit the bacteria. Ticks differ from most biting insects in that when they bite a person they embed themselves into the skin and remain there for prolonged period

3. Know when and where ticks are active. Lyme disease occurs most commonly in rural areas of the northeastern US from Virginia to Maine, northern California, and in the northern Midwest. However, occasional cases are occurring in many new locations in the US and Canada. About 80% of cases occur in May through July. Most state or local health department can provide current information.

4. Ticks thrive in moist, bushy areas with high grass and leaf litter. Teach children not to lie on the ground in such areas and to walk in the middle of paths and trails. Ticks are less common in dry, sandy environments. Ticks attach to people when people brush up against ticks on grass or twigs. Ticks cannot fly or jump. Once on human skin they can crawl anywhere on the body. Dress children in “anti-tick” attire. Light-colored apparel makes it easier to spot ticks crawling on clothing. Long sleeve shirts and long pants tucked into socks helps avoid skin contact.

5. Mosquito repellents are effective against ticks. See our recent posting for applying repellents to young children. The repellent most often recommended for this age group is DEET in 20 to 30% concentration. DEET is safe for infants aged two months and older. Wash off when no longer needed. In highly infested areas, apply permethrin 0.5% to clothing. Permethrin is a safe substance that kills ticks on contact and remains on clothing for extended periods, even after laundering.

6. Check children for ticks.Ticks require at least 36 hours to embed themselves into skin to be able to transmit the bacteria into the skin. Have children bathe or shower soon after coming indoors. This helps wash away ticks not yet embedded. Ticks are difficult to see. Some are the size of a pinhead. Use a magnifying glass, if necessary. Check scalps carefully. Lyme disease is never transmitted from person to person.

7. Know how to remove ticks. Use fine-tipped tweezers. Grasp the tick at the skin surface. Pull straight, in a continuous motion. Don’t twist – this can cause the mouth parts to break off and remain in the skin.  Never use hot matches, nail polish, or petroleum jelly to remove ticks. Visit a medical facility if part of the tick remains in the skin.

8. Save ticks that you remove. Place the tick in a sealable, transparent envelope or jar. Bring it to a medical facility. Experts can determine if a tick is the kind that can transmit the causative bacteria. If yes, a short course of a commonly used antibioticstore.online prevents Lyme disease. If not, there is no reason to treat.

9. Recognize early Lyme disease symptoms. Even thorough examinations can overlook tiny embedded ticks, especially in an uncooperative child. Fortunately, Lyme disease can still be effectively treated when early symptoms appear. Be suspicious of reddish discolorations  of the skin that grow to several inches in diameter and then begin clearing at the center, giving the rash a “bull’s eye” appearance. The redness usually develops 3 to 14 days after the bite and at the bite site. Medical treatment is essential. Other symptoms of Lyme disease include fatigue, chills, fever, headaches, and muscle and joint pain.  If left untreated, Lyme disease can involve joints, the  heart, and the nervous system. 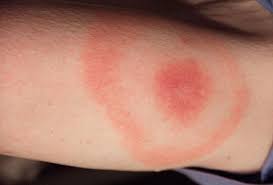 10. Miscellaneous. If children have been in tick-infested areas, wash and dry their clothing at a high temperature to kill any ticks that remain. 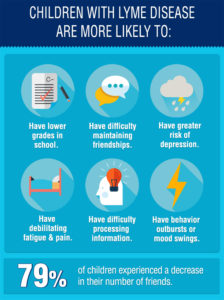